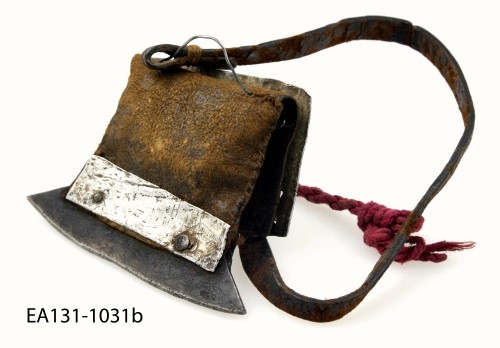 “What is old junk to you, can be another’s treasure.”

For children and adults alike, Winnie-the-Pooh is a rewarding acquaintance. I was reading a story to my sons the other day, where Winnie is about to trash an old honey jar, but ends up giving it to Piglet, who absolutely treasures it. The Hundred Acre Wood is a small and cozy micro-cosmos, where the inhabitants help and actually like each other. One could wish that the world as we know it was a little more like the world of Winnie-the-Pooh and all his friends. But… parallels can be drawn anyway. The parallel I want to focus on here is that of the honey jar and ethnographic objects, as some – if not many – of the objects we have in the ethnographic collections have ended up in the hands of the ethnographic collector – simply because they have played out their roles in their original context. Reading to my two sons, I found myself propelled back to the Holy City of Lhasa in the summer of 2002. At that time, tourism was an up going enterprise. Being a tourist in Lhasa (as I was), there were and are two sites that are a must: the Potala and the Jokhang Temple. On Wednesdays there was a big market outside the gate of the Jokhang temple, where pilgrims, tourists, and petty traders intermingled in gentle confusion. In the many small booths in the Wednesday market were everything from prayer flags, prayer wheels, and other sorts of ‘tourist items’ aimed at the Tibetan pilgrims, having prostrated their way to Lhasa from wherever they lived. But in other booths, worn-out everyday items like tinderboxes, belts, and scull cups were available for the tourists’ small change. A true Eldorado for a museum curator! I did not dare to buy a scull cup out of fear for the reprisals from the Chinese border police, but I did buy a tinderbox (exactly like the one in the photo) for what equals USD 1.2. It had obviously gone out of use with the introduction of lighters. So – this tinderbox – a victim of globalization, one might say, ended up being one of the Tibetan treasures that ended up in a place very far away instead of winding up in a dumpster somewhere in Lhasa.