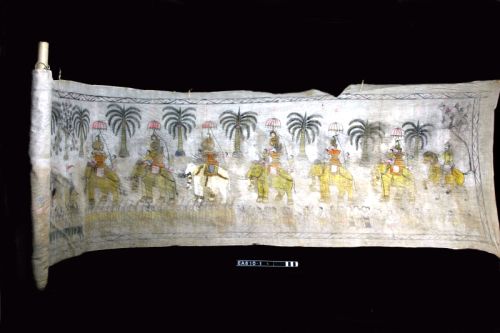 Museum storage rooms hold thousands of objects, and sometimes treasures evade our notice, until an outsider spots their value. Such was the case with the Thai temple scroll tucked away on a shelf at The Ethnographic Collections at Moesgaard Museum. The scroll was gifted to the museum in 2006, by psychologist Anders Poulsen, who bought the unique object in the village of Ban Phran Muan in Northeastern Thailand, where he worked for a UNESCO school project in the early 1960s. Poulsen brought it home to Denmark where he sold it to Gladsaxe Municipality, using the money he got to fund the building of a school in Thailand. For a while, the scroll decorated the wall of an office in a public school, only to end up forgotten in the school attic.

Luckily, in 1999, Poulsen decided to find out what had happened to his old temple scroll. After quite a bit of detective work, he traced it to the school attic, and a few years later, he donated it to The Ethnographic Collections at Moesgaard Museum. Here, it drew the attention of American Professor of Anthropology Leedom Lefferts, who finally saw its true value: unbeknownst to Poulsen, the school in which the scroll had been kept, and indeed the people at The Ethnographic Collections at Moesgaard Museum, the scroll is both the oldest and the best preserved of its kind! Made in 1928, it depicts the ceremony of Siddharta, which still takes place in Northeast Thailand and Laos today. At 22 meters, it is an impressive piece, full of lively scenes of animals and people painted in delicate colours. 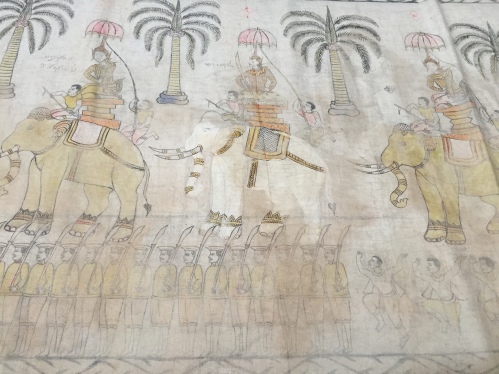 Next year, the scroll will be on display at the Völkerkundemuseum der Universität Zürich, so if you happen to be in the neighbourhood, stop by and visit one of our collection’s greatest treasures. 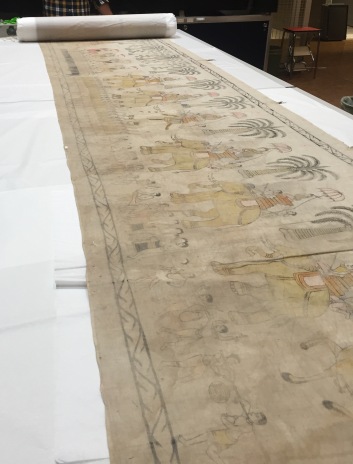