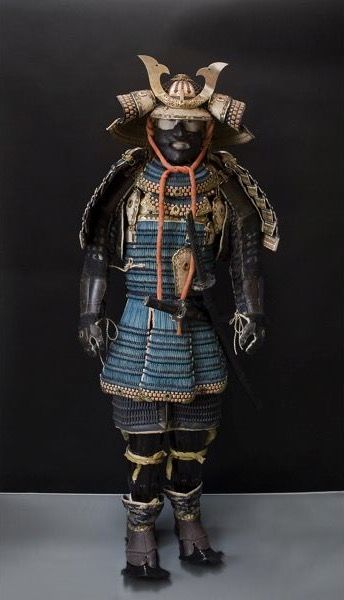 The readers will have to excuse the author for being even more of a nerd than usual. But in museum ethnography and some part of anthropology, the explanatory powers of objects are being explored these years. I just read a book a couple of weeks ago called Biographical Objects. The author, Janet Hoskins, gives an insightful and thought provoking analysis of the potential of certain objects to tell people’s biographies. She shows how the presence of a particular object opens a ‘room’ in which it becomes possible to talk about life shaping events and courses. A ‘room’, which would have been impossible to enter if that particular object had not been there.

This samurai garb opens a story, which would hardly have been told, had it now existed: the story – or rather the history – of museums in Aarhus. In 1861, a courier delivered a big box to the newly opened local museum in Aarhus next to the Cathedral. The box had been transported all the way from Copenhagen. It contained no less than two samurai garbs. The recipient of garbs (with accompanying swords) was T. C. Dahl, who had just founded the small association that would later become known as Moesgaard Museum. As prefect in Aarhus, he had requested the loan of the two samurai garbs from what is today known as ‘Tøjhusmuseet’ in Copenhagen – a museum of military uniforms, weapons, and the like.

Why T.C. Dahl requested the loan of the garbs remains unknown, but they have not left Aarhus until this very day. Those familiar with Danish history will know, that the Danish Army suffered a humiliating defeat to the German armies in 1864, and the loan of the garbs was presumable forgotten. Aarhus Museum moved to another location in Aarhus in 1877, and around 1910 the garbs were moved again. It was decided that the old Aarhus Museum should focus on Danish prehistory (that decision was reversed later in the 1940s), and the strange Japanese garbs were transferred to The Old Town; the local open-air museum situated in the botanical garden some 800 meters away. Here the garbs and the swords at some point fell into oblivion – only to be found in 1984 by the head curator, who opened an old cabinet in an attic (there are many houses and many attics in the Old Town!), which had not been opened for decades. And what almost fell out: the samurai garbs!

The museum was clearly focused on the history of Danish market towns – with no interest in Japanese samurai garbs – and they were transferred to Moesgaard shortly after. At Moesgaard, the Ethnographic Study Collection belonging to Aarhus University was placed. These collections were formally handed over to Moesgaard Museum in 1999. One of the marvelous garbs was exhibited in the exhibition “One World – a Thousand Stories” in 2007.

The swords, however, have been missing for many years….