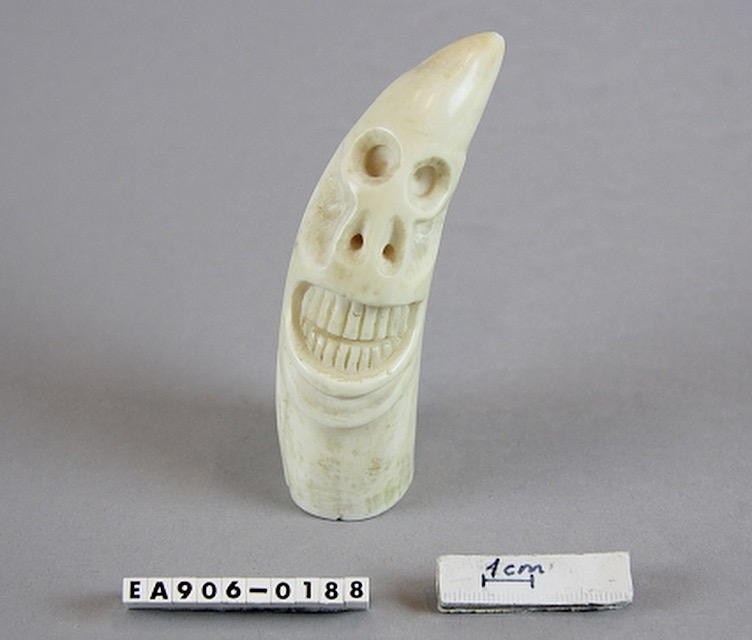 When I was a child, I was absolutely fascinated by tupilaqs. These grotesque Greenlandic figurines with gaping mouths and twisted limbs seemed alive to me, and stirred my imagination to conjure up images of strange spirits tormenting the arctic landscape and its inhabitants. These figurines are, now, often carved from bone, antler, or tusk and are to be found in many Danish homes (and will be familiar to any observant Dane, who watches the Queen’s New Year speech and has noticed the little white figurines, usually placed on the desk before her).

With these fascinating figurines in mind, it came as quite a surprise to me that ‘real’ tupilaqs were actually originally made from skin, hair, and sinew as well as from bone, and that these parts sometimes came from human remains.

See, tupilaqs were not always decorative objects to adorn the shelves and desks of people (and queens), who visited Greenland and wanted to bring home a souvenir. No, they were in fact malicious spirits, brought to life by a person who sought revenge. Rather than white and intricately carved figurines, real tupilaqs were brown and bloody things, brought to life by a vengeful person, and set into the sea to seek revenge. Fighting a tupilaqs could be bloody business. In the book Inuit Shamanism and Christianity: Transitions and Transformations in the Twentieth Century, one man told the story of how he witnessed the killing of a tupilaq as a child:

“My uncle was given something to heal someone. He was trying to kill a tupilaq. Others saw it, but being a child, I searched for it but could not see it. They said it was big but I could not see it at all. My uncle was down on the floor, and suddenly his hands were very bloody […] I remember this. I heard a snap and then the floor was all bloody. His hands were all bloody too. I remember him jumping on it. He seemed to be in a trance when he was doing this. He washed his hands in the urine pot, and his hands became clean. When I woke up the next day, we could see the shapes of a dog and a human on the floor. We were told that they were the images of the tupilaak that had been killed. We children were told to kill those tupilait so we started beating at those images. I remember this as a child. They were the images of the tupilaak that had been killed the day before. Maybe they were what had made the person sick.”

Transitions and Transformations in the Twentieth Century, by Frédéric B. Laugrand, 2010.

Because the original tupilaq figurines were thrown into the sea, there are none of them left for us to see. We only have the ones in bone and tusk, carved by Inuit encouraged by European travelers. But maybe then we can hope that they will remain inanimate and peaceful. As beautiful as they are, I do not wish for a visit from a real tupilaq.

3 thoughts on “Arctic Monsters: A visit from a Greenlandic tupilaq”