It did not take long for the Mongolian assistants to realise that something was terribly wrong. The jingling and rattling sounds coming from the bags on the heavily loaded camel exposed their terrifying cargo: a complete set of shaman equipment. Powerful artefacts imbued with spirits, who held the potential to cause immense harm.

In her book, Among Herders of Inner Mongolia, Christel Braae writes about how explorer and ethnographer Henning Haslund-Christensen tracked down the family of a dead shaman. He had heard that there was a family in the Barga-area who were in possession of the paraphernalia and costume of their relative; a dead female shaman who had been very powerful. Haslund-Christensen found the son of the shaman, who told him that he did indeed possess the artefacts; they were locked in a chest, and was in fact causing them family all kinds of problems. The son of the shaman had married a woman from the Ölet people, who adhered strictly to Lamaist beliefs. The woman and her family were terrified of the shamanic objects, and believed that they were the cause of the family’s misfortunes, including the deaths of several infants.

According to Haslund-Christensen, he explained to the family that he would buy the shaman’s paraphernalia and take it far away, thus ridding them of the terrible burden they posed. Whether this somewhat romantic and heroic version is the complete truth, we do not know. But he did indeed manage to acquire the complete set of shamanic artefacts, as well as the deceased shaman’s clothes – and according to him, the family were very happy, and the wife later gave birth to a healthy baby boy (Braae 2017: 160).

But then what? As I noted in the beginning, the journey to bring the artefacts to Denmark was in no way easy. Haslund-Christensen’s assistants were terrified, and indeed he had to transport the artefacts all the way to the mission station in Golchaggan in one go, because the local Mongols were too scared to let him stay at their homes overnight. Braae cites the Swedish missionary Gerda Ollén, who was at Golchaggan when Haslund-Christensen arrived with his unusual cargo:

“Very late yesterday, Haslund arrived heavily loaded with devilry. It was the property of a deceased shamanistic sorceress. Among it, well rolled up in many black rags, was a piece of yellow cotton in which they had received the souls of dead shamans. On this dirty yellow cotton there was a bag with a small devil affixed to it. In the box were a human skin and a lot of other sorcerer’s tools. It was not strange at all that the Mongols did not dare to offer him shelter for the night. Rumour runs faster than you can move here in Mongolia. When Haslund insisted on unloading his treasures in the yard, the Mongols stood and laughed and tried to look unaffected. I think they were trying to hide how terribly scared they really were” (Braae 2017: 157-58).

Later, when he returned to the expedition’s field station Chagan Khure, he had to unpack the artefacts on the roof of the building, to keep them at a distance from the terrified Mongols.

And now, many of these artefacts are to be found in the exhibition ‘On the steppes of Genghis Khan – Mongolia’s nomads’ at Moesgaard Museum. Here you can see the old Chinese mirrors, the leather and silk folder containing raven feathers, and perhaps most eerie of all, the two pouches containing felt dolls, on which the dying shaman breathed her last breath. There is no denying that these artefacts are somehow animate. Whether by malicious spirits of generations of shamans, I do not know. 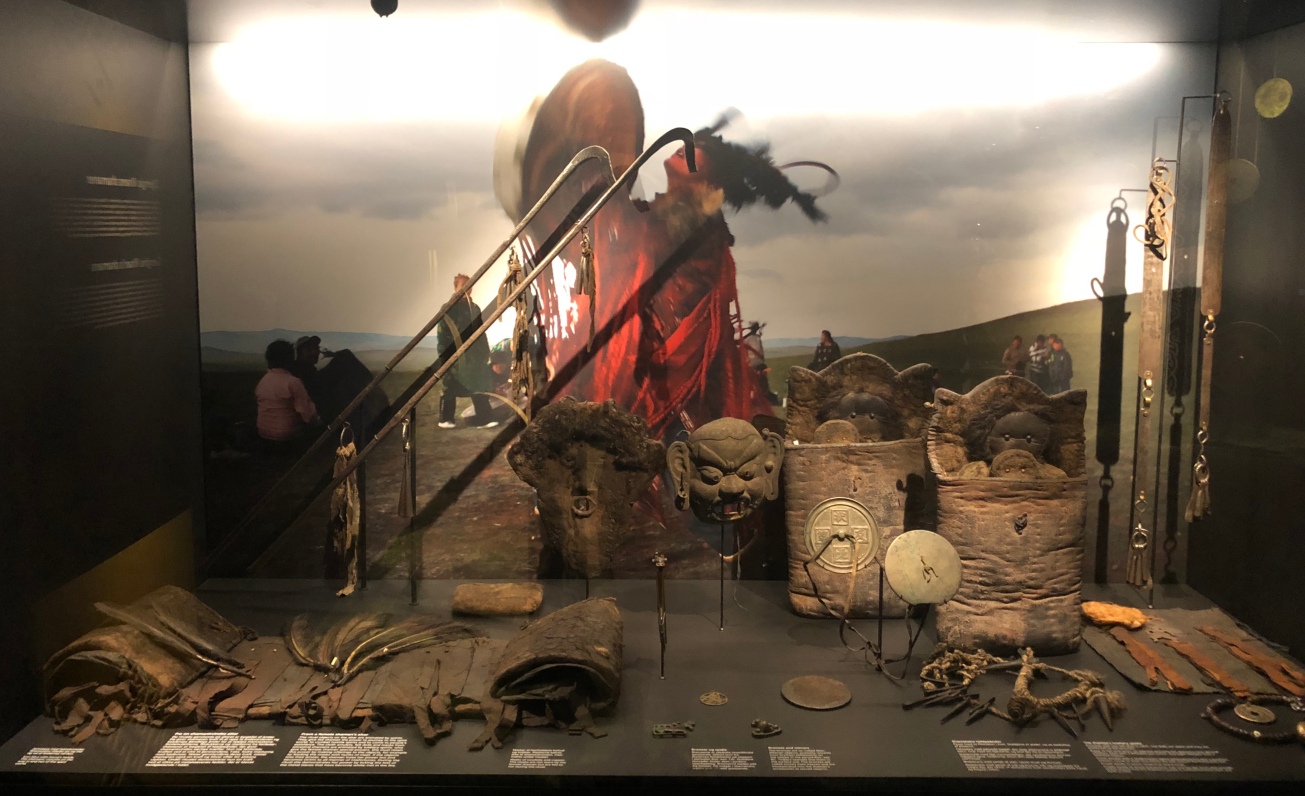 But maybe there is something to it…? Braae moves on to describe how Haslund-Christensen soon fell seriously ill. He suffered from an inflamed knee and several bouts of high fever, one of which rendered him unconscious for two days. His Mongol assistants at least were not in doubt of the cause of his illness: the newly acquired shamanic artefacts were housed in the same building, and they were making him ill.

Luckily, Haslund-Christensen survived the illness this time around, and he survived to continue his expeditions for another decade. But his health was in decline, and in 1948, he passed away while he was on the 3rd Danish Central Asian Expedition. He is buried in Kabul, Afghanistan.

Do you want to know more about the wonderful Mongolian collections? Visit the exhibition ‘On the steppes of Genghis Khan – Mongolia’s nomads’ at Moesgaard Museum, or read Christel Braae’s fascinating and richly illustrated book Among Herders of Inner Mongolia: The Haslund-Christensen Collection at the National Museum of Denmark (2017).