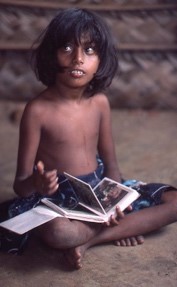 This last month, we have had the pleasure of having Maria Grilo intern at the Ethnographic Department at Moesgaard Museum. Maria is a Portuguese journalist, who came to Denmark to attain an MA in International and Global History at Aarhus University. During her internship, she has worked with the photographs of Danish globetrotter and photographer Mogens Stryhn. In today’s blog post, she writes about some of the pictures, she found.

The last step in the process of scanning and archiving each box of Mogens Stryhn’s pictures is to check if the sequence of digitalized photos in each folder matches the sequence of slides saved in the plastic folders. It was in this final stage of processing yet another box with amazing portraits, this time from Sri Lanka, that the image of a little girl sitting with a photo album on her lap captured my attention. 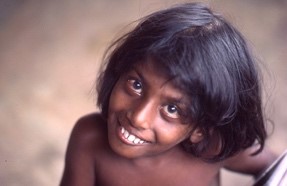 I’ve noticed her before, while scanning the two beautiful individual portraits – made and saved by Mogens – in which she is interacting closely and intently with the camera, her joy and playfulness captivating, magnetic. At that point, I wondered: what is Mogens’ secret? How does he manage to interact with so many people, of all ages, from so many different cultures, speaking a multitude of languages, and establish this kind of connection, making so many feel playful, curious, pleased, at ease? What is his secret to stop being a stranger, if only for a while?

Now, looking at this other photo, in which we can see the open photo album resting on the girl’s lap, I’m intrigued. Whose pictures is she looking at, I wonder, while zooming in. Is the album hers or her family’s? Zooming in doesn’t help, all remains blurred. Why did Mogens take, but mostly why did he chose to keep this picture? Could it be one of Mogens’ photo albums? Could it be that he carried some of his previous work around with him while he travelled, and that he used his pictures as a kind of presentation card?

I imagined something like this: him getting to a new place, saying ”Hi, I’m Mogens,” (the salutation probably in the local language), then pointing at a portrait in the photo album, next to the camera, and lastly to the person he wants to photograph. As in, ”this is what I do with this thing – would you like to do it with me?” Almost no words used, communication being mostly visual, physical, sensorial.

Helpful and reasonable people, with whom I have meanwhile shared my theory, have rightly pointed out that ”probably Mogens hired guides to get him around safely and act as interpreters in his travels?” Hmmm. Well, I have to recognise that that would have made it much easier for him to present himself and communicate with the people he met and photographed, and it just basically makes sense.

Yet, the idea that peoples’ shared humanity is enough to establish bonds of trust and cooperation, regardless of language and culture, across time and space, is simply too alluring and comforting for me to let go of it, just like that. Nirvana’s song ”Come as you are” opening line comes to the mind, and a decision is made: I choose to imagine that, in his many encounters around the globe, over more than half a century, Mogens always showed up as he is, as he was. Just a man with his camera, and a few of his pictures in a photo album. And that that must have been, on most occasions, more than enough to start a conversation.