I have always found the phenomenon of ‘the collector’ immensely fascinating. Perhaps because I am a bit of a collector myself… I have saved every cinema ticket since seeing The Waterboy in 1998, and am the proud owner of a splendid rock (actual rocks, not the music genre) collection, now resting in a Dr. Martens shoebox in my parents’ basement. But I have also collected trinkets and souvenirs from all the places I have been, and find the idea that you can walk through my home alone, and somehow be able to get a feel of who I am, quite lovely.

That is why I cannot help to imagine what kind of people Randi and Johan Dæhnfeldt were, and how wonderful it must have been to take a stroll through their home. Because we have in our storage almost 300 artefacts given to us by the couple, either inherited by them, bought on auction, or collected on their own travels. There are Greenlandic tupilaqs, Latin American pottery, East African jewellery, Japanese figurines, Native American amulets, Indian brass figures, and so on. In my mind’s eye, I see a home where every shelf and every drawer holds a new secret, or a new fascinating story.

Randi Dæhnfeldt grew up on the Stensbygaard Estate in southern Zealand, the daughter of a ship owner. Her father had travelled in the US between 1915 and 1921, and had brought home a collection of Native American artefacts. The artefacts were housed in a log cabin on her father’s estate, and as a girl Randi would love to look at the artefacts and hear stories about her father’s travels. And these fond childhood memories spurred an interest in other cultures and places, and in collecting artefacts from these places. Now, Randi and her husband Johan did not have any children of their own, so she did not tell the stories of her collection to her sons and daughters. Instead, she left the collection partly to the National Museum of Denmark, and partly to Moesgaard Museum.

So, I am hoping that the collection will be used in the future to tell stories to other little girls and boys (and adults too). And that these stories will instil in them a curiosity for other people and places.

In the featured image you can see (from top left): An Indian brass figurine of two gods, an Inuit mask from Greenland, a Chinese vase, a turquoise decorated box from Nepal, a beaded Native American pouch, a salmon pendant from the Haida people (Canadian West Coast), a Japanese netske figurine depicting a mouse, a Tibetan tinderbox, and a Masai necklace.

Here is a little extra selection from the Dæhnfeldt collection: 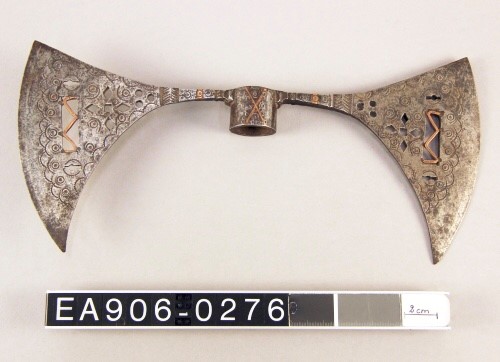 An African double headed axe. Unfortunately, we do not know which country it comes from. 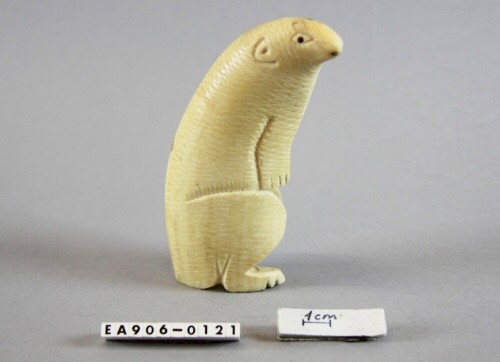 A Greenlandic tupilaq, in the shape of a polar bear.

A handwritten book from Burma.

A Native American beaded pouch. perhaps it was collected by Randi’s father?